Halo 4; My thoughts and theories.

Well then. First blog post, EVER. Let's make it about something worthwhile! Halo 4! While it was announced at E3 via a debut trailer, it's actually been in the works for about 2 years. And even better news, it's announced as part of a trilogy! That means Halo 4, Halo 5, and Halo 6! Here's the trailer for anyone living under a rock with no connections to the outside world!

Before i get into my thoughts and theories, let's look at the story so far. If you remember it, this next part is pointless.

The United Nations Space Command ship "The Pillar Of Autumn" comes out of slip space, and finds a huge ring floating in space. They get attacked and then BAM, they have to abandon ship. The Chief (The super-soldier you get to play as) is given the AI "Cortana" to escort safely. So he stuffs her in his helmet, and listens to her nag at him non-stop. He gets off the ship, and lands on said "Ring-World".

So now they wanna find out what the hell they landed on, and in they go! And then, whilst fighting over control of a research facility, they release a parasitic zombie race called The Flood.

Now the stupid Flood are out, an extremely annoying floating robot eye comes out of nowhere to clean up the mess of zombies you just released. He activates the defense stuff, and now we're fighting flying robots as well as zombie parasites!

They find out from him that the ring has a mechanism to destroy all life forms within 25,000 light years. So, the Chief and Cortana figure if that thing gets activated, everyone's buggered.

They eventually destroy Halo and save the silly human race. Woo.

Halo 2 starts with a view from the covenant side. With the Halo ring being destroyed, and the covenant taking the hit, the three Prophets,Truth, Mercy and Regret, blame an elite commander for failing to protect the ring. He's branded with the Mark Of Shame by the Brute (Ape Monkey thing) Chieftain "Tartarus".

Then the Covenant decide to invade earth, and the Chief springs into action, sending a Covenant bomb back to their ship, and returning to Earth to defend it from the invaders, which are being led by Regret. The UNSC beat the Covenant, and the Prophet flees with Miranda Keyes, the UNSC Captains daughter.

We then come back to the Covenant, and the elite commander is given a chance of redemption, by becoming the new Arbiter (Which is supposed to be a warrior with the greatest honor, when really it's just becoming the Prophets slave-boy). He's sent to kill a heretic, finds 343 (The annoying floaty robot orb) and then loses it to the Brute Chieftain.

Back to the Chief. They follow Regret through slipspace unnoticed, find another Halo ring, and kill the prophet. The Covenant decide they should just glass the whole planet, and the Chief is thrown into a lake and taken by an ancient intelligent Flood called "Gravemind".

Tension builds with the Elites and Brutes, and the Covenant quiz 343 on activating the ring. They send the Arbiter to do their dirty work, and find the Index (Key to activating it). He finds it, captures Johnson, and Tartarus rides in and steals his thunder again, then talks about how they really just want him dead. Then the Arbiter gets knocked down a deep shaft (Hehe).

Now both the Chief and the Arbiter are caught by Gravemind, and that's where they meet. Gravemind explains what the ring really does, and they both end up on the same team. The Chief is sent to fetch the Index, and the Arbiter is sent to stop his little friends from destroying everything.

The Chief chases Truth, sees the Brutes and Elites fighting, and saves some marines. Gravemind sends the flood in, and Mercy gets infected and tells the Chief that Truth is heading back to Earth. He fights his way onto the ship, but leaves Cortana behind.

The Arbiter and his little friends rush in and save Johnson, who commandeers a Scarab and makes a hilarious alliance with the Elites. They get in, but Tartarus activates the ring, using Miranda Keyes to do it. The Arbiter kills Tartarus and stops the ring in time, although the other rings are put on standby for remote activation by the Ark.

With Truth about to wipe out everything, the UNSC need to make one last big move to try to stop him. They plan to send the Chief and a squad to destroy the Anti-Air defenses so they can activate a low-level airstrike on the artifact. Power is cut and Truth tries to freak everyone out.

They then escape, and destroy the Anti-Air defenses as planned. They attack, but Truth activates the artifact and the Covenant fleet escape through a slip-space portal.

A Covenant ship controlled by the Flood crashes in the city and they investigate. Discovering that Cortana is on board, he retrieves her. Finding out that this is only a message, telling them that Gravemind is coming to Earth with a big army of Flood.

They decide to take a trip to the Ark, and fight their way to the Citadel. Johnson is captured and forced to activate all remaining Halo Rings. The dynamic duo then team up with the Flood to stop it. They stop the Rings, and the Flood turn on them. The Chief discovers the Ark is harboring a replacement ring, for the one they destroyed. He then decides to activate it, knowing the risk the Flood posed, but realizing that he needs the Index to activate it.

The Chief rescues Cortana, and they destroy Gravemind. The Arbiter, Chief, Johnson and Cortana then make their way to the Ring, and find Gravemind attempting to reconstruct himself on the new world. Johnson tries to activate the ring, but 343 mortally wounds him. The Chief destroys the flying robot orb, and sends Johnson out with a bang.

They race off the planet, and try to escape through a slip-space portal. The ship is then cut in half by the portal, and only the Arbiter makes it through. The Chief and Cortana are then shown to be on the other half of the ship, floating through space, towards a mysterious planet. The Chief then goes into a cryotube and tells Cortana "Wake me when you need me".

Now that that's out of the way, back to the point.

I have thoughts, and theories relating to how the story is going to go now, or what's going to be in the game. Obviously the only information we have to go from is the story so far, and the trailer.

According to one of the awesome guys making it, there are hints and spoilers throughout the trailer for people who are attentive to detail. Now, i've barely noticed much, but i'll show what i HAVE noticed. 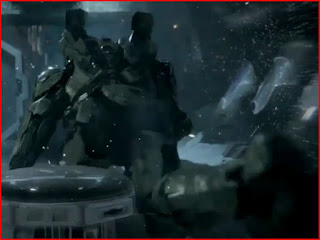 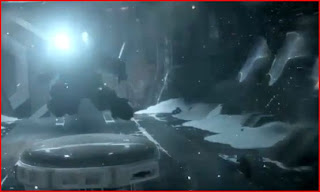 Correct me if i'm wrong, but the Mark VI Armour didn't have built in thrusters, did it? Could this mean Halo 4 is going for a Reach-style gameplay? Or was it just for cinematic effect? 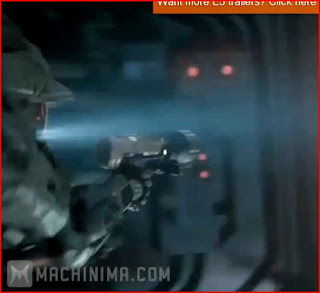 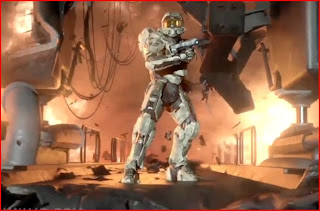 The weapon that John-117 picked up was clearly a grenade launcher, which he used to blow a hole in the ship to escape in. At first i thought it was an attachment for an AR or something, but upon analyzing it more i came to rethink that. It kind of looks like a pistol firing a grenade, but it would simple be a new version of a proper grenade launcher. This could mean other weapons are changed as well.


Mysterious planet at the end of Halo 3
Clearly, they are still heading towards said planet. From this trailer we see that at the end, they are being drawn in by a Covenant-looking beam. The outer walls of the entrance open in a similar way to the typical Covenant doors, and the color scheme seems to match pretty closely. Of course, i could be completely wrong, but to me it seems like the Chief is once again facing off against the Covenant, perhaps just another division? A friend of mine thinks that, taken from the novels, this object is an artificial outer casing housing a planet inside. Given, it's possible.

EDIT: Said friend, gave me information relating to his theory. Taken from the Halo novels, the artificial outer casing is apparently a "Dyson Sphere", which is a safehouse for the Forrunners against Halo's main weapon. He believes that Dr. Hansley and the surviving Spartan II's are trapped inside. That would be epic! If this thing IS a Dyson Sphere, i believe it would hold the Forrunners, perhaps housing a new enemy made solely for their protection. Oh theories, theories and more theories until 343 gives more info!

Having the world believe you're dead would be a major setback, adding to the fact that you have no idea where you are. That's what we know the chief is goin' through. I think it's safe to say we won't be expecting to see any of the Chief's old buddies anytime soon. I don't mind though, without Johnson, the UNSC just seems so dull..

At any rate, this game looks freakin' sweet, that's only judging by a Debut Trailer! And the fact that it's a trilogy, and that we can play as the Chief for another 3 games, just adds to the excitement! The best thing about the Halo games, by far, is the insanely big story, and hopefully 343 Industries can pick up where Bungie left off! :)
Posted by Unknown at Saturday, June 11, 2011