In light of the Battlefield 4 news, I thought I'd share my thoughts on what I'd like to see. Enjoy!

I may be one of the only ones, but I really didn't like the Battlefield 3 campaign. Battlefield 2 had no campaign, just multiplayer, and it was brilliant! I think for a game that boasts these large scale battles with playercounts up to 24 for consoles, and 64 for PC, the single player seems a bit trivial. We don't play huge multiplayer games, to go into a campaign and play alone.

If you're going to have a campaign, have it playable with two to four friends. That's what makes campaigns in games like Halo so great. I think Battlefield has the potential to pull off some brilliant cooperative play. As long as teamwork is emphasized and essential for mission completes. Battlefield 3 had cooperative, but it was awful. Let's face it, nobody wants to play Battlefield alone, leave that for Medal of Honor.

Make it bigger than ever for consoles.

With the rumored technology floating about for the next gen consoles, I see no reason for there to not be a 48 to 64 player count, and maps to suit. Doing this would surely allow for a more amazing game. This could allow for squad combat to become more essential, simply because of the scale of combat happening around the battlefield. I don't know what it's like on PC, but this is what I'd hope it is.

This would definitely allow for much longer matches, and the gameplay to feel more like we're fighting in a war, and less like a small CoD style battle. I would imagine Rush would become something entirely different than what it is now.

Balance the classes a little better.

In Battlefield 3, the Assault class seemed a lot more useful, with better equipment and weapons. The Engineer was just as useful. Nobody seemed to like being Support, and Recon was left for the pretentious little kids, and the people who are interested in sniping in like every game, which includes me.


Let's balance them a little more. I'd like to be able to actually get ammo when I need some. I can't stress how annoying that is enough.. 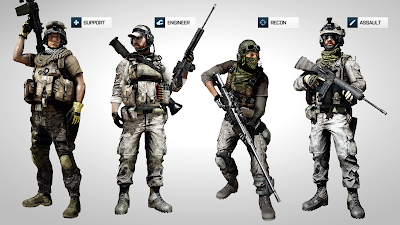 The Battlefield games are infamous for utilizing the Frostbite Engine to create awesome destructible battlefields. The problem is, not all of the battlefield is destructible. most small houses are, trees topple over, craters come from big explosions, but the bigger buildings can only be reduced to a metal frame. I find this rather disappointing, so that's one thing I'd like improved. The amount of things to be destroyed would be increased if the player count and map size is increased, and since it's probably going to be on the new consoles, we may even see Frostbite 3.0, which would be awesome.


Anyway, that's what I'd like to see. What are your thoughts? Is there anything I've missed?
Posted by Unknown at Sunday, March 17, 2013 No comments: